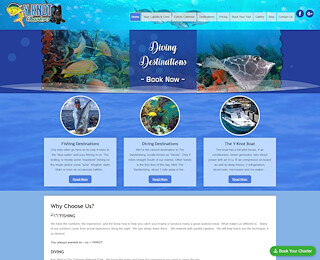 Key West is home to a few of the most terrific and awe-inspiring fishing expeditions in the world. Anglers have the option of using small fishing charters in Key West to row the shoreline or the manageable parts of the deep sea. The bigger fishing trips often have the participation of the Charter Boat Row found in Garrison Bight. These boats make up a big part of Key West’s pride due to their history in competitions and the garnered tournament awards.

The Charter Boat Row vessels range between forty and fifty feet in length. They explore the Gulf areas in pursuit of marlin, dolphins, sailfish, and other big water species. While they form a big part of history’s capsule of fishing charters in Key West, there is an entirely different world that may not be open to most people.

What is the history of charters in Key West?

Charter boats did not have popularity in Key West during the 19th century. The reason for that is that the area was mostly an isolated settlement with few interferences from passionate sports fishers. The first documentation of fishing charters goes back to 1876. The identified shop owner charged crewmen $4 a day to sail out to deep waters of the Florida Keys.

The momentum to establish more commercial charters took a favorable turn in the 20th century. Tourists began spreading the word on their fishing experiences, creating a boomerang effect in the market. People flocked the beach towns of Florida Keys and spent days vacationing to get a turn of the fishing experiences. Entrepreneurs exploited the accommodation industry by opening first-class hotels such as Sunshine State. This growth added to the number of famous citizens flocking the location.

A turn of events

The 1929 depression affected plenty of niches for Americans. Tourism took a nosedive and was recording almost nil benefits by the late 1930s. Subsequent business failures led to a total crash of fishing charters in Key West. This trend continued through the 30s until the first break of recovery in 1938.

The developing charters found anchors at the Craig Docks, the P&O steamship and the eastern shore of Key West. World War 2 put another unprecedented break to sport fishing and the locals’ economic status. The formation of viral charters picked up at a steady and drastic pace post-war.

Best times to enjoy a fishing trip in Key West

Fishing has variable moments for the utmost enjoyment throughout the year. You will catch most of a particular species at various seasons. Winter temperatures foster sailfish in the deep sea, and groupers, yellowtail snappers and mutton snappers around the reefs. It is a favorable fishing time if you want to enjoy calm waters even on the windiest of days.

Springtime is the most popular fishing time in Key West due to the favorable weather for both humans and fish. The water clarity will give you an entertaining view of the tarpon migration from June to July. Fall is not a favorite fishing season for the bigger populace, making it perfect for visitors who find crowds to be unnerving. Y-Knot Fishing Charter is a revered club that will help you make a definite decision about your fishing trip.